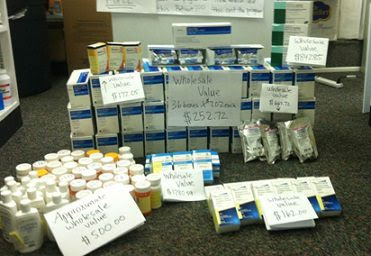 As the Drug Enforcement Administration (DEA) gears up for another National Prescription Drug Take-Back Day on April 26, the group representing independent pharmacists says its members are eager to help their communities get rid of unwanted or expired drugs year-round.

According to the National Community Pharmacists Association (NCPA), more than 200 tons of medications have been collected at more than 1,600 participating community pharmacies across the country since it created the voluntary Dispose My Meds program in 2009. Many of the medications being dropped off for safe disposal at community pharmacies come from excess mail-order prescriptions that are auto-shipped to patients, whether they want the medication or not.

“Our members are your mom-and-pop community drug store,” says Carolyn C. Ha, PharmD, NCPA’s Director of Professional Affairs and Long-Term Care. “More than half our members are from rural towns with populations of 20,000 or less. The pharmacists know their patients really well. The pharmacists are community leaders, they answer many healthcare questions and are committed to addressing prescription drug abuse.” Many people come into their local pharmacy asking what to do with their unused or expired medicines, often because they have teenagers and don’t want them poking around the medicine cabinet, or because they have grandchildren and don’t want them at risk of accidental poisoning.

People in small towns also want a safe place to dispose of medications, because of concerns they could end up in the water supply if they flushed them down the toilet, Ha noted.

Current DEA regulations do not allow pharmacies to accept unwanted or expired controlled substances including prescription opioid painkillers such as oxycodone or hydrocodone, stimulants such as Adderall or Ritalin, or benzodiazepines like Valium or Xanax. The agency is working to change those rules, and the NCPA supports those changes, according to Ha.

The DEA has proposed new regulations to give the public more options for disposing of unwanted prescription drugs, such as painkillers and sedatives. The new rules are designed to reduce the amount of highly-abused prescription drugs on the streets. The DEA proposes that law enforcement agencies and pharmacies serve as collection boxes for certain medications. The agency also recommends implementing mail-back programs to safely dispose of the drugs.

Under the proposed rules, for the first time, groups outside of law enforcement would be allowed to collect unused drugs for disposal. The proposal would also allow authorized retail pharmacies to voluntarily maintain collection boxes at long-term care facilities. The DEA also calls for continued use of prescription drug “take-back” events. No date has been set for the new regulations to be finalized.

“Pharmacies are a good place for people to drop off medications, because it gives people an opportunity to ask pharmacists questions, and some people may not be comfortable dropping them off at a police station,” Ha says.

If pharmacies are allowed to collect controlled medications such as opioids, the DEA rules will give specific guidance about security measures that need to be in place, to ensure the medications are not diverted. “Pharmacies are held to extremely tight regulatory controls regarding dispensing medications, so we think it’s a natural fit that we should be able to take them back as well,” observed Ha.

Many of the medications community pharmacies collect are the remains of 90-day supplies ordered from insurance companies. Some are expensive specialty drugs, such as inhalation solutions used in nebulizers by people with respiratory conditions, or diabetes drugs and supplies such as test strips and lancets used to test blood sugar levels. “Often, it’s cheaper for patients to order a 90-day supply, even if they don’t need it,” Ha says. The group has documented many cases in which patients or their families have brought in thousands of dollars of mail-order medication.

Some community pharmacies are barred from taking back any medications because of state or local regulations. Those pharmacies that do collect medications generally do so at no cost.

To find the community pharmacy nearest you that collects medications, visit www.disposemymeds.org, and click on the “Pharmacy Locator” tab on the top right side of the page.