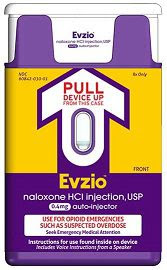 The Food and Drug Administration (FDA) has approved a handheld device that delivers a single dose of the opioid overdose antidote naloxone, The New York Times reports.

The device, called Evzio, is similar to an EpiPen used to stop allergic reactions to bee stings, the article notes. It can be used by friends or relatives of a person who has overdosed. When the device is turned on, it will give verbal instructions about how to use it. The medication blocks the ability of heroin or opioid painkillers to attach to brain cells. Evzio is expected to be available this summer.

“This is a big deal, and I hope gets wide attention,” said Dr. Carl R. Sullivan III, Director of the Addictions Program at West Virginia University. “It’s pretty simple: Having these things in the hands of people around drug addicts just makes sense because you’re going to prevent unnecessary mortality.”

According to a news release from the FDA, family members or caregivers should become familiar with the instructions for use before administering Evzio. “Family members or caregivers should also become familiar with the steps for using Evzio and practice with the trainer device, which is included along with the delivery device, before it is needed,” the FDA advises. The agency notes that because naloxone may not work as long as opioids, repeat doses may be needed. A person utilizing the device should seek immediate medical care for the patient.

Many states have begun to make naloxone more widely available. The FDA notes existing naloxone drugs require administration via syringe, and are most commonly used by trained medical personnel in emergency departments and ambulances.