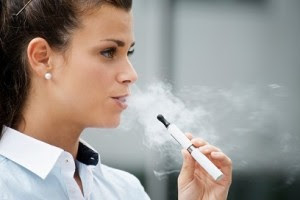 Vapor produced by e-cigarettes can contain formaldehyde at levels five to 15 times higher than regular cigarettes, a new study finds. Formaldehyde is a known carcinogen, NPRreports.

Researchers from Portland State University in Oregon found formaldehyde in e-cigarettes could increase the chance the toxin will get deposited in the lung. They reported their findings in this week’s New England Journal of Medicine.

“I think this is just one more piece of evidence amid a number of pieces of evidence that e-cigarettes are not absolutely safe,” said co-author David Peyton. “We simulated vaping by drawing the vapor — the aerosol — into a syringe, sort of simulating the lungs,” he explained. The researchers then conducted a detailed analysis of the vapor.

Long-term exposure to formaldehyde is recognized as contributing to lung cancer, Peyton noted. “And so we would like to minimize contact (to the extent one can) especially to delicate tissues like the lungs.”

Gregory Conley of the American Vaping Association told NPR the researchers found formaldehyde only at e-cigarettes’ highest voltage levels. “If you hold the button on an e-cigarette for 100 seconds, you could potentially produce 100 times more formaldehyde than you would ever get from a cigarette,” he said. “But no human vaper would ever vape at that condition, because within one second their lungs would be incredibly uncomfortable.”

Peyton argues many people use the high settings on e-cigarettes. “As I walk around town and look at people using these electronic cigarette devices it’s not difficult to tell what sort of setting they’re using,” he said. “You can see how much of the aerosol they’re blowing out. It’s not small amounts. It’s pretty clear to me that at least some of the users are using the high levels.”
Posted by GODS RECOVERY TRANSFORMATION CONNECTION at 9:24 AM