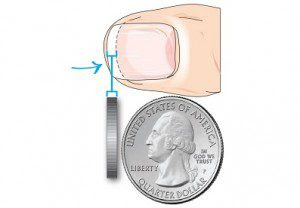 A pilot program that uses fingernail drug and alcohol testing is helping to spot drivers who have been convicted of driving while intoxicated who are continuing to drink or use drugs. Fingernail testing captures a person’s history of drug and alcohol use for the past three to six months.

The program, in Kenosha County, Wisconsin, is testing drivers who have been convicted of at least three DWI offenses, says Guida Brown of the Hope Council on Alcohol & Other Drug Abuse, which assesses drivers convicted of impaired driving in the county. Drivers must successfully complete the yearlong program in order to maintain their driving privileges.

“We do a lot of assessment, but until now there’s been no teeth behind it – no ability to help people see they really have a problem – and help guide them in a way to stay abstinent,” says Brown. “With this test, when we say you can’t use drugs or alcohol for the one-year duration of the driver safety program, we can verify the results.”

Lewis and Brown presented the findings of the pilot program at the recent annual meeting of the College on Problems of Drug Dependence.

Most counties don’t do any drug or alcohol testing as part of their driver safety programs, Brown notes. “The big problem isn’t just drunk driving anymore – other drugs are becoming more of a hazard on the road, including marijuana and prescription drugs,” she says. The pilot program found 59 percent of those tested were positive for alcohol, suggesting they continued to binge after their last DWI arrest. Of those tested for drugs, 35 percent were positive. Cocaine, marijuana and opiates were the most commonly found drugs.

Lewis says the test typically costs $100. In Kenosha, clients of the DWI program pay for the testing themselves, which typically takes place about four times over the course of the year. While some counties see the cost of the test as a barrier to its use, Brown notes it is done much less frequently than a urine test, which must be conducted every few days to give accurate results. She has advocated for more state money to increase funding for drug and alcohol testing, and for extending the length of the program. “We’d like a longer monitoring program so we could help more people finish,” she says.

Drug testing using hair is more widespread than fingernail testing. Fingernails, like hair, are made of a protein called keratin. Drug and alcohol biomarkers are trapped in the keratin fibers of the fingernail. Biomarkers may be washed out of hair by common cosmetic treatments such as bleaches, dyes, permanents and straighteners. This reduces the presence of detectable substances. This isn’t a problem with nails, Lewis says. Unlike hair, which stops capturing drug and alcohol biomarkers once hair grows out of the body, nails continue to capture these substances as the nail grow in length and thickness.

Nails provide up to six months of drug use history and up to three months of alcohol history, according to Lewis. Biomarkers are detectable in nails as early as one week after drug or alcohol use. A typical sample is 2 to 3 millimeters, about the thickness of a quarter.

Lewis stresses the test won’t come back positive for the person who has a drink or two a day. “You need at least six standard binges—consuming five standard drinks in a two-hour period for a man, or four for a woman—in a three-month window for the test to come back positive,” he says. “This test finds someone who drinks often enough to cause concern.”

The test also detects amphetamines, opiates, cocaine, marijuana and PCP. While fingernail testing has been available for the past 20 years, until recently it has largely been used for research, according to Lewis. Improved technology has allowed scientists to refine the test so it can detect drug and alcohol use even when a person is not using these substances daily.

In addition to DWI programs, some professional health programs are using fingernail drug testing. “These programs, such as those for doctors, need clients to maintain a low level or as close to an abstinent level as possible for long periods of time,” observes Lewis. “This test allows evaluators to have an objective set of tools.”
Posted by GODS RECOVERY TRANSFORMATION CONNECTION at 10:24 PM