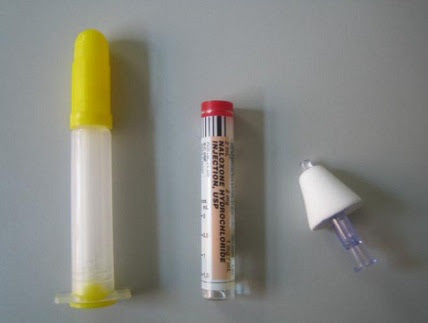 Government officials Tuesday urged first responders to increase their use of the drug naloxone to reverse overdoses of heroin and prescription opioids.

Heroin overdoses kill 100 people every day, Director of National Drug Control Policy R. Gil Kerlikowske said at a White House press conference Tuesday. “Naloxone has very few side effects and can be safely administered in many different settings, so there is some hope for its expanded use,” he said.

“Because police are often the first on the scene of an overdose, the Administration strongly encourages local law enforcement agencies to train and equip their personnel with this lifesaving drug. Seventeen states and the District of Columbia have amended their laws to increase access to naloxone, resulting in over 10,000 overdose reversals since 2001,” the Office of National Drug Control Policy (ONDCP) noted in a blog post. “Used in concert with ‘Good Samaritan’ laws, which grant immunity from criminal prosecution to those seeking medical help for someone experiencing an overdose, it can and will save lives.”

At the news briefing, federal officials pointed to a pilot program of naloxone in Staten Island, New York, where an officer used the drug to reverse an overdose in January, CNN reports.

The increase in heroin abuse is linked to the risk of prescription drug abuse, according to Dr. Wilson Compton of ONDCP. There has been a 20 percent increase in overdose deaths involving prescription painkillers since 2006. “Heroin is cheaper than prescription drugs and they make the switch for economic reasons,” he said. Heroin and prescription drug abuse are not limited to any certain demographic or geographic area. Officials noted that heroin use is increasing among young adults.
Posted by GODS RECOVERY TRANSFORMATION CONNECTION at 7:29 AM