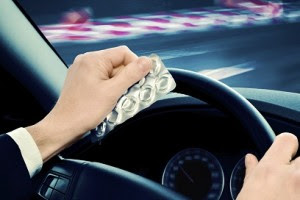 Fewer Americans are driving drunk, but a growing number are driving under the influence of marijuana and other illegal drugs, according to a new government report.

Mark Rosekind, who heads NHTSA, told the AP, “The rising prevalence of marijuana and other drugs is a challenge to everyone who is dedicated to saving lives and reducing crashes.”

Over the last two years, 22 percent of drivers tested positive for at least one drug that could affect safety, including illegal drugs, prescription drugs and over-the-counter medications.

During weekend nighttime hours, about 8 percent of drivers had some alcohol in their system, and 1.5 percent had a breath alcohol content of .08 percent or higher—the legal limit in every state.

A second survey conducted by NHTSA found people who use marijuana are more likely to be involved in accidents. The agency acknowledged the findings may be due in part to the demographics of marijuana users. Young men, who are at increased risk for vehicle crashes, are also more likely to use marijuana.

In a news release, NHTSA said it plans further research on drugged driving, including a roadside survey in Washington state, where recreational marijuana is legal. The agency will also conduct a simulator study with the National Institute on Drug Abuse to determine the driving behavior of people under the influence of drugs.
Posted by GODS RECOVERY TRANSFORMATION CONNECTION at 6:22 AM