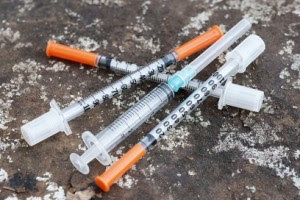 More states and cities are considering needle-exchange programs as a way to fight the spread of HIV and hepatitis C among intravenous drug users, according to The Wall Street Journal.

In Indiana, Governor Mike Pence declared a state of emergency in response to a growing number of HIV cases linked to intravenous use of the painkiller Opana. He authorized a short-term program in one county to allow people to exchange used needles for sterile ones, to reduce the risk of contaminated needles being shared.

There are about 200 needle-exchange programs in 33 states and the District of Columbia, according to the North American Syringe Exchange Network.

Public health officials are especially concerned about the spread of hepatitis C among people who use intravenous drugs. Hepatitis C can survive outside the body for at least 16 hours, and potentially up to four days.
Posted by GODS RECOVERY TRANSFORMATION CONNECTION at 6:18 AM