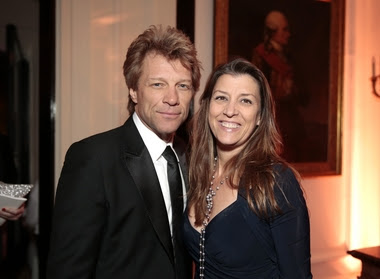 Jon Bon Jovi, who appears in this photo with his wife Dorothea Hurley at the White House Correspondents' Association after-party Sunday, will accompany Gov. Chris Christie today when he signs a bill shielding from prosecution people who report a drug overdose.Getty Images
PATERSON — When Gov. Chris Christie signs the Good Samaritan Overdose Prevention Act at a drug treatment facility in Paterson today, Jersey rocker Jon Bon Jovi will be at his side.
Bon Jovi has lived through the trauma of a child suffering a drug overdose. Six months ago, authorities found 19-year-old Stephanie Bongiovi unresponsive following a heroin overdose in her Hamilton College dormitory in upstate New York. Police later arrested her on drug possession charges.
The Sayreville-raised musician and philanthropist has spoken publicly about the experience, telling Katie Couric on her talk show in March he had no idea his daughter had a drug problem. "The problem is much more prevalent than I know. I cannot get over how many people I've met that said 'my son' or 'my daughter' … There is a lot of pressure on kids these days," Bon Jovi said, according to published accounts of the interview.
"She's doing great and I appreciate everyone's thoughts and prayers. I'm just blessed she's healthy and whole, and we'll get through it," he added.
Christie is signing a bill that allows people to call 911 to report someone has overdosed on drugs, without the fear of getting themselves arrested for drug possession.
Only six months ago he had vetoed the bill, saying it didn't focus enough on prevention and deterrence. But a group of families whose loved ones had died from drug overdoses pleaded with the governor and the legislature to find a compromise. They had testified at committee hearings that overdoses often occur in the presence of other drug users, but medical assistance is summoned only half the time because bystanders fear arrest.
On Monday, Christie and the legislature approved a new bill that provides immunity to 911 callers under most circumstances. But they combined it with another measure that makes naloxone, an FDA-approved remedy for drug overdoses, available to spouses, parents or guardians who could be taught to administer the drug in an emergency.
Christie and Bon Jovi are first expected to tour Turning Point’s facility at the Barnert Medical Arts Complex this afternoon before the bill signing, according to the governor's office.
Posted by GODS RECOVERY TRANSFORMATION CONNECTION at 6:27 AM